As of 1 o’clock on Friday, Janaury 6th, the irrigation system pump was turned back on. A stalwart crew of volunteers checked the pipes and hose bibs for any damage from the cold snap….there was none to be found so the system passed the test!

They also checked to make sure all drip system hose bibs were turned to the “ON” position…except those systems whose owners had taken their timers home during the frost alert.

It would be a good idea if you have a drip system to inspect it while it runs next time you are at the Farm to make sure the parts are tightened enough so there are no leaks.

Last week, Irrigation Coordinator, Rick Cunningham performed an experiment with PVC and copper pipes filled with water to see how they would fare when the temperature dropped into the 20’s. He reports that no ice formed in the pipes even on Wednesday morning when it was just 26° …good news for our pipes!

tomatoes…peppers…chard…squash vines…even some peas and carrot tops got “burnt” by the cold.

(note to self for the next go-round with a cold snap-“use a heavier-weight frost cloth or double it up!”)

Winter’s not over yet so we will keep a weather-eye out for future frost alerts. In the meantime, keep your seedlings warm at home but don’t forget to harden them every now and then on those sunny but chilly days before transplanting them to your plot! (1/6/12)

First Tulip! Proof that Spring IS on the way! Janet and Jane have done a wonderful job of tending the flower beds […] 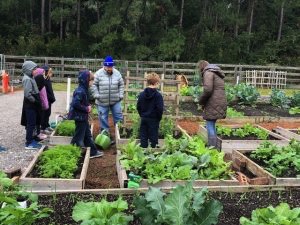 A chilly November 15th welcomed 30 first graders and their teachers from St. Andrews school on Wilmington Island to our farm. This […]

Open the south gate and step one foot into Skidaway Farms and you will tread on the pathway named for Dr. Charley […]